Causes and Effects of Climate Change in Nigeria 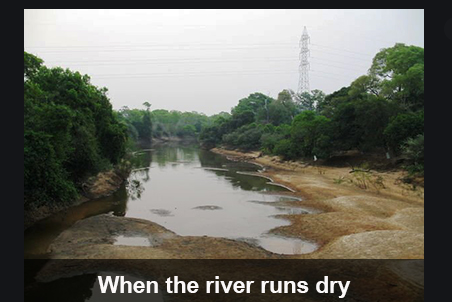 Climate is the average weather conditions over a specified period of time usually several decades to establish statistical properties such as mean values, variance and probability of extreme events.

For example, we can state that the climate of Nigeria is characterized by the dry and the rainy season, since for several decades this has been the trend in Nigeria.

Therefore, climate change can be defined as alterations in climate patterns over a period of time ranging from few years to decades.

When sunshine intensity or timing in any particular month, season or year deviates from what has been normally observed, the changes are noted. The observed deviation, if noted from year to year, is an example of climate variability.

When the deviation persists, it is referred to as climate fluctuation. If the fluctuation persists for a sufficiently long time and is further found to be statistically significant, then this indicates that climate change has occurred.

The present paper examines the various factors that lead to climate change, the impact of the change particularly as it affects developing countries and the possible role, the technological development and harnessing of renewable energy can play in improving energy efficiency and reducing the emissions that contribute to climate change.

In this section, we examine the various factors that lead to climate change.

Climate change is mainly caused by human activities. Human activities, both agricultural and industrial, that leads to the emission of increasing quantities of greenhouse gases into the atmosphere.

The primary GHGs are carbon dioxide and water vapour, and they play a crucial role in regulating earth’s temperature and the earth’s atmosphere.

Hence, climate change is characterized by global warming which is the increase in average surface temperature of the earth.

Meteorological data from reliable sources shows that the warming of the last 100 years was unusual and unprecedented. Scientists have attributed the warming of to an increase in the emission of greenhouse gases into the atmosphere.

Human activity is mainly responsible for the emission of these gases into the atmosphere. Carbon dioxide is produced by the burning of fossil fuels (coal, oil and gas) as well as land-use activities such as deforestation, etc.

Since 1750 (the beginning of the Industrial Revolution) carbon dioxide emission has increased by 31 percent, and the emissions of the GHGs continue to rise steadily.

Carbon dioxide accounts for over 85 percent of the pollution leading to global warming. The industrialized countries produce 25 times more carbon dioxide per head of population than the developing countries.

The five largest emitters of carbon dioxide per capita are the USA, the UK, Japan, Germany and Canada, with the USA alone emitting one-quarter of the global greenhouse gas emissions.

Africa’s contribution to global warming is very small when compared with that of the USA and the UK. The whole of Africa contributes only around 3.5 percent of global emissions of greenhouse gases.

Impacts of Climate Change in Nigeria

Critical assessment shows that the impact of climate change is mainly on the poor. Disasters such as droughts and floods have already killed and affected millions, and these are predicted to escalate in frequency and intensity.

Other effects of climate change include food insecurity, ill health, loss of forests and biodiversity, social and political instability and economic decline, all of which will be hardest on the poor.

Droughts are now common across Africa and have affected the Sahel, the Horn of Africa and Southern Africa. Forest areas are fast shrinking and grasslands and desert areas are expanding. Climate change will worsen the trend and bring more hardship especially through severe drought.

In northern part of Nigeria and regions of other African countries such as Mali, Mozambique, Rwanda, Ethiopia, drought is becoming more and more frequent, leading to drying out of soil and disappearance of vegetation. The lives of many people are on hold waiting for clouds which promise less and less rain.

There is reported rise in sea level along Nigerian coastal waters. This has brought about increased occurrence of coastal erosion.

The sea-level rise and repeated ocean surges will not only worsen the problems of coastal erosion already troubling the Niger Delta. The associated tidal wave will increase problems of floods; intrusion of sea-water into fresh water sources; and affect agriculture, fisheries and general livelihoods.

The most important environmental problem facing the coastal areas of the country is coastal erosion. It is the most important impact of sea level rise in the region and needs to be addressed.

Already, settlements in the coastal region have been uprooted by flooding of low-lying areas in the region as well as by coastal erosion.

Coastal erosion poses serious problem for the economic activities in the Niger Delta especially natural sectors such as farming and fisheries (about 50% of the fish consumed in Nigeria is from the Niger Delta).

Coastal vegetation especially the mangroves have been lost to coastal erosion.

The Niger Delta region of the country could lose over 15 thousand square kilometers of land by the year 2100 with a one meter rise in sea level.

Another adverse effect of sea level rise in the Niger Delta is the increased salinity of both surface and underground waters due to the intrusion of sea water. This will lead to the death of aquatic plants and animals that cannot tolerate high salinity.

Some terrestrial plants that have low tolerance for high salinity will also be affected.

Thus, sea water intrusion will have a serious impact on the food security in the region because of its impacts on coastal agriculture.

While climate change is responsible for increase dryness and desertification in northern Nigeria, it is causing increase in flooding in the southern part especially in the coastal regions.

Apart from coastal erosion, flood in general has affected negatively the livelihood of many communities in the region. Flood and erosion remove top soil, destroy roads, affect fresh water resources and threaten lives and properties.

Many people have been rendered homeless by floods and several roads are only passable during the dry months of the year.

The frequency at which floods occur in Nigeria has increased in the last decade. Floods paralyze economic activities in many towns and cities in the Nigeria.

One common consequence of flooding is increase in transport fare. Commercial drivers usually increase their fare to make up for the distance they drive to avoid flooded roads, thereby putting the burden on their passengers causing a general increase in the cost of goods and services.

Food security refers to the ability of people to grow and obtain food. More than 70 percent of the Nigerian population lives by farming.

Majority of the farmers depend on rain-fed agriculture for jobs and income making the country vulnerable to climate extremes that disrupt agriculture.

Data from reliable sources have shown that rainfall pattern in Nigeria has changed in the past decades. The below-mean rainfall recorded in the last two decades in Nigeria indicates an abrupt change in climate.

Nigeria has two seasons (the wet and dry seasons). The wet season spans from May to September whereas, the dry season starts in October and ends in April.

Agriculture in Nigeria is highly sensitive to rainfall pattern especially in southern Nigeria where rain-fed agriculture is mainly practiced. Climate change will most likely pose serious threat to food security.

Climate change has brought about unpredictable rainfall pattern (timing and amount) and affects agriculture. Agricultural practices in most parts of Nigeria are highly dependent on rain and irrigation is seldom practiced. Therefore, alterations in the rainfall pattern have affected the agriculture in the region.

Farmers in the region plant their crops after the first or second rain in the month of March, and sometime in April. After the first rain, the rain falls periodically till the months of June/July (the peak of the rainy season).

Owing to alterations in rainfall pattern, farmers who plant after the first or second rain incur huge loss when the rains are delayed beyond the usual due to climatic changes.

Before this time farmers could predict the rain and they knew exactly when to plant their crops.  The crops after they are planted are watered periodically by rain before the peak of the rainfall in June.

The amount of rainfall within the period before the peak is necessary for the optimum yield of many crops most especially the maize which is widely consumed in all parts of Nigeria.

It is evident that Nigeria is already experiencing the effects/impacts of climate change. Nigeria and other developing countries, despite having contributed least to greenhouse gas emissions, are likely to be the worst hit by the impacts due to mainly to the lack of institutional, economic and financial capacity to adapt and cope with changes.

From the foregoing, there is the need for government, NGOs, and other stakeholders in Nigeria and other developing economies to initiate processes that reduce GHGs emission and promote climate change mitigation.

There is the need for good environmental practices, renewable energy, and energy efficiency products.